Read the fascinating History of Finance and discover how accounting has moved from parchment scroll to Oracle, from individual accounting styles to set procedures. 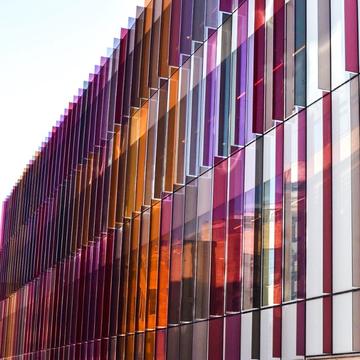 Find out why chests were used to keep money and valuables secure and how scandal and embezzlement has punctuated the honour of Oxford University.

The Painted Chest: The last of several chests now on display in the Finance Division offices.

"The Chest of the Five Keys"

The Chest itself is an iron box, the present one being made in the seventeenth century and officially named The Painted Chest. It has a lock in the lid and four hasps and staples, two on the front and one at each end. It is painted with the coats of arms of the University and of such Colleges as were in existence when it was made. The "Chest" has had several meanings, it may have meant the now defunct committee officially called "The Curators of the University Chest", it may mean that part of the Old Clarendon Building in the Broad once used as an office by the permanent officials, it may mean those officials themselves.

THE UNIVERSITY AND THE COLLEGES

The beginnings of the University lie in the 13th Century when students fended for themselves in small groups based in inns and lodging houses. The Collegiate University evolved from these small groups.

The University is quite separate and distinct from the Colleges, each of which operates under its own royal charter. Each College is a self-governing body but has a number of connections with the University, both financial and academic.

There is, however, one very important difference which is that the University receives a grant from public funds through the Higher Education Funding Council for England (HEFCE) which accounts for approximately 25% of its annual income. The Colleges, on the other hand, receive no such grant, although until 1998/99 they did receive a grant paid on a student number basis from the DfES.

Since then, a change in the method of funding student education in colleges has resulted in public funds being routed through the University and allocated to colleges on the basis of student numbers. Colleges also benefit indirectly from grants from public funds in that their members make use of University laboratories, libraries, museums, etc.

Use this WYSIWYG to display the login button for a system, or a button to register for an event.

Display contact details for your department or team here